Superfoods are integral to any good weight loss plan. Alongside some rudimentary exercise, superfoods help immensely in the weight loss process. This is because of the chemical hormone called leptin. But what is leptin?

Before talking about superfoods themselves we have to talk about leptin and leptin resistance information. Leptin is known as the satiation hormone within the body. Basically, its the hormone that tells the body that you are full and don’t need to eat anymore. Leptin resistance can be a cause of obesity as your body gets accustomed to the amount of food you eat and sends the signal to the brain that you are full at later and later time meaning that you eat more. Eating the right superfoods alongside sleeping well and exercising can reverse this leptin resistance making it easier to diet and lose weight.

What superfoods should you eat? 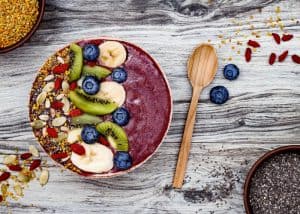 Berries are a good start for superfoods as a daily snack. Not only would it just be healthier to snack on fruit during the day than fatty processed food but berries especially contain all the right nutrients. Some studies suggest that berries might reduce some heart issues in young women because of the chemicals they contain.

Speaking of reducing heart disease, salmon and other fatty fish are incredibly high in a chemical called omega three which in many studies has shown to reduce the chance of strokes and heart failures.

Sweet potatoes make a good alternative to your average potatoes as they are naturally sweet. They don’t need layers of fat or butter added to them. They also contain lots of fiber and vitamins, specifically vitamin A.

Dark and leafy greens such as kale and spinach are great because they include many different important minerals and vitamins. They are also an incredibly versatile vegetable that works in many different meals.

Green tea is a brilliant alternative to your average sweet tea. It is filled with antioxidants that have anti-inflammatory bonuses. Some studies show that brewed green tea is also responsible for a small decrease in the likelihood of getting cancer.

While eggs have a relatively high cholesterol content, especially compared to some of the other food on this list, they are still incredibly healthy food to eat. Eggs contain a huge amount of nutrients and vitamins and are also a great source for high-quality protein.

Garlic is a great source of manganese and vitamins. In some cultures, garlic is even used with other ingredients in medicines. Garlic also is relatively effective in reducing cholesterol and blood pressure. Not only that but the nutrients within garlic play a role in preventing some types of cancer.

Ginger, in whatever form eaten, contains an antioxidant called gingerol which has plenty of health benefits. It’s useful in treating nausea and preventing some more chronic illnesses such as heart disease and some forms of cancer.

Overall, superfoods can help to control weight loss, and prevent a number of different illnesses whilst also giving you the nutrients and vitamins needed for your daily lives.